Teach Ag day is right around the corner and its an exciting day! We can appreciate those who teach us about agriculture in the classroom and out. I know I love teaching people one thing new about agriculture. For so many of us agriculture is our passion and lively hood. I also love being a student of agriculture I love learning new things about the industry.
As a kid growing up I wasn't around the traditional farming, what I learned was from a small scale, a book or a field trip. My dad was a great teacher of agriculture to me and my brother cause he was the first one to teach me how to plant vegetables and care for the fruit trees. In high school I had a few ag teachers, Mr. Bruga and Mr. Appleby, they were great! They had a challenge of teaching us city kids all about agriculture and they did it. I'll never forget Mr. Appleby my sophomore year asking all of us to write on the board what we wanted to learn about agriculture, and I never saw a class of 35 kids so eager to get up and write on a board what we wanted to learn. That year was a great year, I don't think a kid skipped a class cause we all wanted to learn. So thank you to Mr. Appleby for taking all of our ideas and turning them into a year's worth of lessons and teaching us what we wanted to learn! I'm years out of high school and college and I still remember those ag classes and loved learning about agriculture.
I had the best teachers and professors of agriculture and I'm so glad that I can have a day to share my gratitude to them. I hope that I can be as memorable as a teacher as they were to me.
Posted by A.Calabretta at 10:42 AM No comments:

Email ThisBlogThis!Share to TwitterShare to FacebookShare to Pinterest
Labels: THANKS 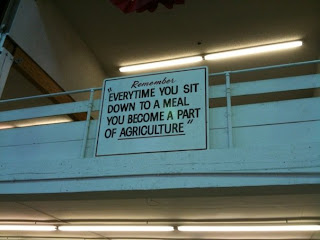 Today is a day we celebrate the farmer and the rancher that provides for us. But really this day should be celebrated everyday. So many of us are removed from the family farm we take for grant it some of the little things in life the farmers help provide. It is such a luxury to go to the grocery store and find all the fresh fruit, vegetables and meat just waiting there for us. Over time we have become more fortunate thanks to all the convenient foods available at the store as well. It wasn't so many generations ago that everyone was made from scratch and grown in our own backyards.
It doesn't matter your views on farming or ranching as long as we call can agree that it takes hard work and dedication to make the food on our table. So don't forget to thank the farmer or rancher that helped provide those meals you enjoy daily!
Posted by A.Calabretta at 6:36 PM No comments:

Here is a little help for all those who need a little more help understanding economics.

SOCIALISM:
- you have 2 cows
- you give one to your neighbor

BUREAUCRATISM
-you have 2 cows
- the state takes both , shoots one, milks the other and throws the milk away

ENRON VENTURE CAPITALISM
-you have 2 cows
- you sell 3 of them to your publicly listed company, using letters of credit opened by your brother-in-law at the bank, then execute a debt/equity swap with an associate general offer so that you get all 4 cows back with a tax exemption for 5 cows
- the milk rights of the 6 cows are transferred via an intermediary to a Cayman Island Company secretly owned by the majority shareholder who sells the rights to all 7 cows back to your listed company
-the annual report says the company owns 8 cows with an option on one more.
- you sell one cow to but a new president for the United States of America, leaving you with 9 cows
- no balance sheet provided with the release
- the public then buys the bull

THE ANDERSON MODEL
-you have 2 cows
- you shred them\

GERMAN CORPORATION
- you have 2 cows
- you re-engineer them so they live for 100 years, eat once a month and milk themselves

ITALIAN CORPORATION
-you have 2 cows, but you don't know where they are
- you decide to go to lunch

SWISS CORPORATION
-you have 5000 cows, none of them belong to you
- you charge the owners a storage fee

INDIAN CORPORATION
-you have 2 cows
- you worship them

BRITISH CORPORATION
-you have 2 cows
-both are mad

IRAQI CORPORATION
- everyone thinks you have lots of cows
- you tell them you have none
- no one believes you , so they bomb the @$#% out of you and invade your country. You still have no cows, but at least now you are part of a Democracy.

AUSTRALIAN CORPORATION
- you have 2 cows
- business seems good
- you close the office and go for a few beers to celebrate.
Posted by A.Calabretta at 5:20 PM No comments: